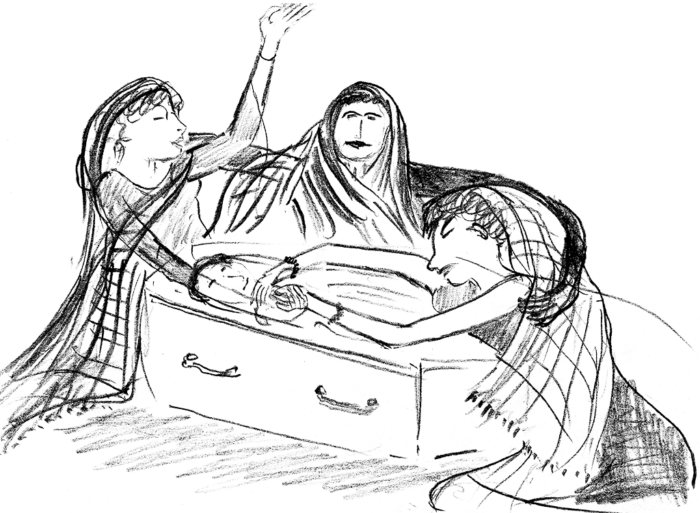 Keening was a vocal ritual artform, performed at the wake or graveside in mourning of the dead. Keens are said to have contained raw unearthly emotion, spontaneous word, repeated motifs, crying and elements of song.

The word keening originates from the Gaelic caoineadh meaning “crying”.  The keening women (mnàthan-tuirim),  paid respects to the deceased and expressed grief on behalf of the bereaved family.

Keening was an integral part of the whole process of undertaking and was performed either at the wake, funeral procession or interment. It was a skilled ritual artform at the meeting point between life and death, and received due respect, including payment. Keeners were generally experienced elder women. Many believed the act of keening enabled the deceased soul to leave the body, and that keening was required, thus giving the role huge importance.

Although the last known keens took place in the first half of the twentieth century Ireland and in the ninetienth century in Scotland, the social practice of keening will have influence in people, places and voices we (and they) can never know. Amongst the travelling people one of the highest compliments to a singer today would still be to recognise the voice of the keener in her.

A keen is distinct from a lament. The Colin’s English Dictionary defines a lament as ‘a poem, song, or piece of music, which expresses sorrow that someone has died’. There is a vast store of heart rendering laments that can be played or sung at any time and in any place in remembrance. However a keen is the final farewell to the deceased, and was composed and performed live, often touching the coffin and addressing the corpse. There would usually be three or more women that were cultural professionals. It was only towards the end of the tradition that you would find a singular woman performing a keen.

Memories of the sound of keening

Phyllida Anam-Áire lives in Edinburgh and is the author of The Celtic Book of Dying. Phyllida worked for many years in hospices and now teaches workshops in the Sacred Biology of Dying. 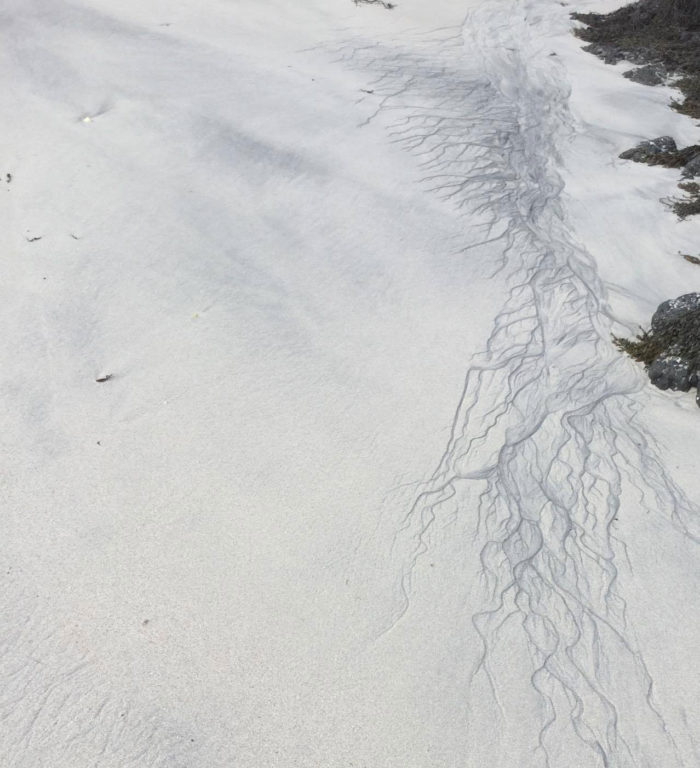 Today many people who have heard of keening think of it as a performance of wild dishevelled wailing women by the graveside. This is how many non-Gaelic speakers interpreted what they saw and therefore one of the many ways the tradition was undermined. Our understanding from the sources remaining, is that keening was a social practice and artform steeped in the depth and beauty of the Gaelic musical tradition. Keens are said to have contained raw unearthly emotion, spontaneous word, repeated motifs, crying and elements of song. Structure was provided by banging on the coffin and the ground, and the repetition of familiar refrains and vocables. Vocables are repeated sounds and utterances that are not words in themselves but allow a structure, pause and feeling to flow. They are heard within very old songs in both Ireland and Scotland, one of the most familiar being the sound ‘óchón’. Of course in different places there would be different ways in which the Caoineadh was done. As a keen was dedicated to the departed, it would never be the same twice.

“It wasn’t singing, it wasn’t anything you could describe… A very melancholy chant, rhythmic … Almost a spontaneous choir…”

Revd Donald Mackenzie, interviewed by E R Cregeen May 1975, in Gaelic and in English. Listen to the original recording on the Tobar An Dualchais online archive here.

Hearing Keening as a child in Donegal 1940’s.

The heart of an oral culture lives in the people and places, the stories shared and the songs sung. This is impossible to capture.  The few recordings that exist (mostly from the 1950s in Ireland) were not recorded in the ritual context in which they would have been sung of a deathbed or graveside. They were recorded in living rooms as rare demonstrations, collected by trusted folklorists who had been building relationships with communities and contributors over decades. Likewise, the texts and laments that do refer to Caoineadh / keening tradition have been collected and committed to paper long after the tragedies they mourned.  Piper and respected tradition bearer, Ailean Domhnallach, reflects that even texts that are believed to have had their roots in a graveside keen, will most likely have taken on a more formalised structure ‘to survive’. A well known example is Caoineadh Airt Uí Laoghaire composed extempore in Munster, 1778 and collected from the professional keener Nóra Ní Shíndile about 30 years afterwards.

Today in the dominant western culture people find it hard to imagine grieving sincerely for someone they may not have met. This degree of empathy would have been intrinsic to the role of keening. A role such as this can only really function if the whole community allows it to – in many ways the listeners play as important part of the keen as the keener themselves. 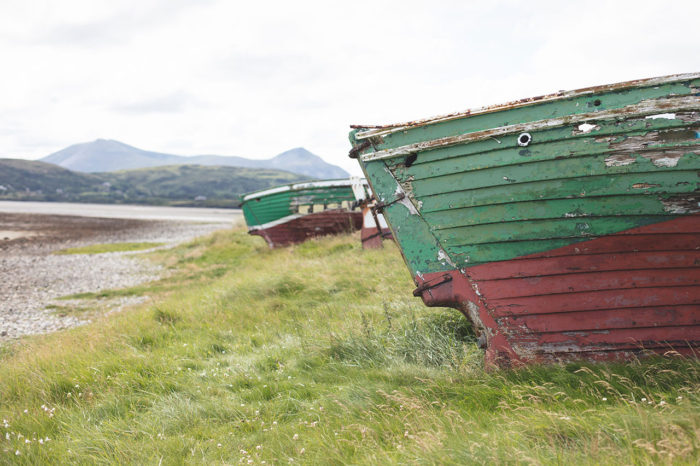 This brief introduction to the Caoineadh is informed by many who have been generous in supporting our research, and who have reinforced our reading on the topic. But given the lack of definitive evidence much of the understanding we share is just that, our understanding.

Please see the resources page to learn more on the subject.